Some films have that special something, and some films seem like they stepped in something. Allow me to help you know the difference, and maybe find you something good to watch. 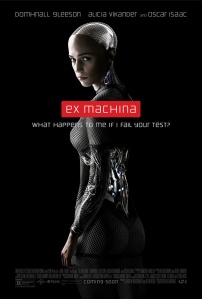 What kills me is that this film had the potential to be mind-blowingly great, but in the end it was only really good.

Worth a watch? Definitely. But measured against the science fiction greats of yesterday? Sorry, but no.

EX MACHINA is about Nathan, a brilliant and narcissistic scientist (Isaac) who builds a beautiful, humanistic robot named Ava (Vikander) and invites an awkward computer programmer (Gleeson) up to his remote compound to interview her and decide if she is real A.I. or just a collection of responses.

You remember BLADE RUNNER (1982), right? How Deckard did his little tests to find out who was human and who was a kill-crazy cyborg? So it’s basically that test, but stretched out over the course of the whole film.

Not that it’s bad! It has a lot going for it. It IS a great premise. It’s well shot, the performances are solid, and the ending will be a cause for some lengthy post-credits conversation.

And therein lies my qualm.

Obviously I’m not going to talk about the ending here, except to say that it wasn’t satisfying, and that that flat note right at the end just left a bad taste in my mouth.

Ruins it? Not at all. EX MACHINA is still a stylish and thoughtful sci-fi thriller with a brain and a darkness, in an age when that same kind of movie usually devolves into vapid explosion-rides with bad CGI and garbage scripts, like ‘I ROBOT’ or ‘TRANSCENDENCE’.

EX MACHINA certainly seems like it belongs with its friends at The Cool Table. And for the casual viewer, it does. It doesn’t surprise me that people are loving this film. There is a lot to love about it.

But I’m not in love with it. It’s a damned shame, but there it is.

Though it went through the motions of a great film, and looked the part, and said the right things, ultimately it failed my Turing test no matter how much skin it applied to its surface.

She smiled real pretty, but I wasn’t swept away.

Bonus points for irony though.

Todd has a wonderful job in the evenings that not only allows him to write prodigiously during the day, but it also puts that trusty B.A. in Media (@USM) to regular use at night. He is a published writer, so that's good. And, can I tell you something? Something in private? The people. The people, they say he is *whispered* ... a lyrical maaadman! They say his words will set you on fire. Literally. So get friendly with the aloe, my friend. ... Actually, he IS required by the state of Maine & jolly old Uncle Sam to provide that warning written in the third person for your initial protection. He will not mention it again.